Lovely Acura self-destructs to save Sara and me

Short version: a car veered diagonally across four lanes and I hit its tail end.

Long version: Cruising on I-85 at 70 mi/h, on the way to the airport. Second rightmost lane. Traffic not too heavy. There is a curly-haired dog sticking out his head out of the passenger side seat of the car ahead of us 3 lanes over. The head gets bigger and bigger - it is a man, naked from the waist up, standing in the window, with his boxers above the window ledge. And then he tumbles out, stretched out horizontally like a tree log,  and falls onto the highway, between the outermost lane and the next one. At 70 mi/h. Sara is looking at this in horror, I am looking straight ahead, keeping eyes on the road.

Their car veers diagonally across four lanes. I brake. I hit its tail end. Nobody hits me from behind. The airbags explode, cushion us from the impact, fill the car with gray smoke. Our car comes to a full stop, 2nd lane. The other car smashes into the side rail. Something that smells weird, like gasoline (maybe) is flooding the floor. Sara gets out and I bring the car onto the shoulder. In five minutes cops are there, with ambulance and fire trucks, and they close the entire I-85. The man who fell onto the highway is running around (see the pic below), until they restrain him to the Grady ambulance stretcher. He is beautiful - I would run around naked to the waist, had I his body, and whatever he is on must be an amazing drug. A fashion pointer: one is now to wear boxers outside blue jeans. The driver is sitting on the rail, texting. He tells Sara "I do not know what happened" and he tells me "I am sorry". His arms have some kind fish bone tattoos, perhaps a pitchfork showing “Folks” affiliation. Police are polite with him, then something happens - suddenly they pull their guns out, shout at him, throw him on the ground and handcuff him from the back, throw him into the back of one of the police cars. It's not a "driving while black" situation, two cops are white, six are black. Their 2010 blue Chevrolet Cobalt LT 2-door coupe has a Tennessee tag U62-33K and a door replaced on drivers side, so one cannot get the VIN number. 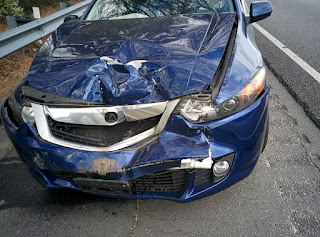 
"Driver is Niles Robinson of Memphis, the VIN is 1G1AF1F57A7128023, and the car is uninsured. Upon my arrival, I saw the passenger, Justin Johnson (BM DOB 05-18-91), laying on the side of the highway wearing no shirt and in blue jeans, with lacerations all over his body. The driver, Niles Robinson (BM DOB 08-01-91) was standing over him looking down on him. Mr. Robinson told me that he was traveling on 1-85 SB Expy, when Mr. Johnson starting acting "crazy" and jumped out of the window. The two of them had just dropped off Mr. Johnson's girlfriend. Mr. Johnson then started say, "Oh so I just jumped out of the window." I asked Mr. Johnson numerous times what happened and he would not tell me. He then said the door was not all the way closed. He did not have any identification on him. I was unable to verify Me. Johnson's identity with ACIC, Police Central, Ominixx or any other resources. Mr. Johnson was transported to Grady Hospital."

"CID Unit 5305 was notified of the incident and told me to call the complaint room in reference to charging Mr. Robinson with Theft by Receiving Stolen Property. I spoke with DA Stevenson who stated that Mr. Robinson could not be charged for the stolen firearm."

"Sgt. Woolfolk and Officer Whitworth went to the Grady with Mr. Johnson and were unable to get any additional information from Mr. Johnson about his identity and what happened during the incident."

"Mr. Robinson received a citation for "No Insurance" 40-6-10
Nothing further to report." 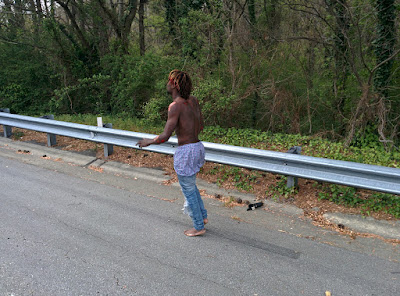 For the pics of cars and the young men, click here. My deep gratitude goes to NRA, which protects the right of every American to bandy a stolen gun, and not be charged with possession of stolen firearm. Good work, Georgia Legislature! And I'm grateful to Sara for not doing her usual, and going over to the driver to reprimand him for his bad driving.

We get to sit in the back of one of the other police cars. You get to understand why that man got his spine severed in a paddy wagon in Baltimore. You cannot fit in your legs any way if you are over 5'8", the seat is of hard plastic, so you can only slide forward in it, not sit, the windows have grills so cell phones do not work, and the doors have no handles.

This contraption ... Only 10 days ago, I got a new set of tires and a new battery, and, on the third try, the 2010 car passed the emissions test (took 1400 mi of driving to get its sensors sensing)​. The very last thing we did before leaving for the airport was to order a new car cover.:)

Still, for the first time since we two got to know each other (Georgia Tech police, who had totaled my Avalon in the physics parking lot, was what brought us together in 2013), I was getting emotionally attached to our Acura - she had just brought us safe back from the racist hellhole that is Mississippi. And her exploding airbags and crumpled front is what saved us from serious injuries or worse. No trauma. No drama. Sara is sore where the seat belt crosses her chest and might have a bit of a cracked rib. I, counter-intuitively, feel better than before the collision - my right shoulder which had hurt for a while hurts less now :) Luv you, baby! I'll miss you...

The saga of me, my Acura and the Sensor Stimulation

Whenever the woman is in town, or we take a trip through South, I crank this thing up. Normally, I just sits in the backyard, getting dented by the acorns shooting down from 100 y old oak trees, or corroded by bird poop bombs. I do 1750 mi/year. Is that excessive? I really do not care about these 4-wheeled contraptions at all.

Well, it turns the tires are programmed to dry rot even if you do not drive them. Good for tire makers, bad for environment.

Came back to Atlanta after a few months away, drove to Miss Daisy and back, and the front right tire developed a leak. Asked my car doctor what to do, he told me to go to a tire place, and ask them with a firm manly voice to remove the nail that seems to be in my front right tire. Otherwise, he said, they will stick you a new set of tires, priced for housewives. Hmm, there seems to by dry rot here? he added thoughtfully... Well, my car doctor is prescient. I went there, dressed as a man, and with the firm voice asked the man to pull that nail and patch the tire. The man came back with a big, half-moon grin: "dry rot!", and $920 later I was four new tires, pumped to different over-pressures, richer.

Now that Acura had gotten my attention, I took it for emissions test across the road from the Midtown Tire in Toco Hills. There I was greeted by a young man, 18-20, of Indian subcontinent extraction, who seemed fresh on the job and was learning it step-by-step, by watching it on YouTube, or something like it, in-between steps. After some twenty minutes, he told me that my sensors were not sensing, and sent me off to drive 50 mi before coming back. Now I was nailed - he had my $25, and he had me in the Georgia MVB systems as partially failing the emissions test, so I could not just drive off to the next guy and get tested again.

Having done meaningless 53 mi over the weekend, I drove all the way back to Taco Hills for the Emissions Test 2.0. I was greeted by a sprightly redneck from Duck Dynasty (are we sure these guys are not Moslem fundamentalists?) who tried again, and then gave me a long sweet tale about what a sensor really wants. Basically, sensors (at least to guys who do emission tests) are more mysterious than women. They might want a hour at 70 mi/h, then down to 60 mi/h, then .... Their algorithms are unknown. He sent me back to the road, for more sensor stimulation.

Or, as the manual so helpfully explains: "certain `readiness codes’ that must be set in the on-board diagnostics for the emissions systems. These codes are erased when the battery is disconnected, and set again only after several days of driving under a variety of conditions."

My bike mechanic Godchile pipes in: "Ah, Duck Dynasty youth - what they are referring to is a Drive Cycle. You need to fulfill a certain number of these.

There is some variation among vehicles but these might do the trick. Its a maddening pain in the ass by the way: repairpal.com/how-to-perform-a-basic-drive-cycle, repairpal.com/drive-cycle-issues-readyness-code-reset-180 . What kind of Acura? Year? Model?"

So now I'll drive to New Orleans and back, see whether that does the trick:)
Posted by ChaosBook at Monday, March 06, 2017 No comments: